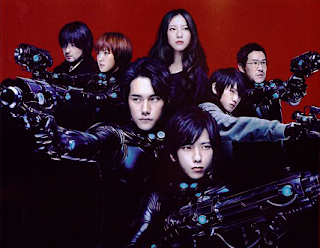 I didn't expect to see a dvd of this at the dvd store since it's Japanese and it's still a recent movie so I was probably lucky. I watched it because I know four people in this movie namely Kanata Hongo, Yuriko Yoshitaka, Ninomiya Kazunari & Matsuken. Kanata was so cool as usual and Yuriko was so pretty!! They're both my favorites even though Kanata was a bad guy and I was disappointed because he died! Gantz is about hunting aliens which kind of makes it a bit of a horror but I wasn't scared though because I find the different aliens interesting. How I hate the boom box alien that killed Kanata! Anyways, the ending was a cliff-hanger... I guess there's a sequel to it. Hopefully, Kanata comes back to life since I saw him in the preview of the movie's Part 2.
Posted by belizema at 9:01 PM