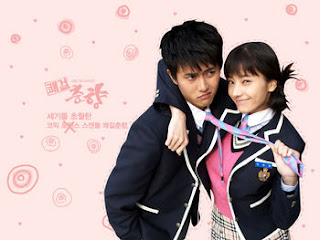 Omo, I just finished watching this now and I don't know what to do because I'm still not over it... I hate the fact that good things in life always come to an end no matter what you do. At first, I didn't expect that I would be crazy over this but now I stand corrected. I watched the drama mainly because I'm a fan of Jae Hee and I've watched three of his dramas already which are all my favorites... seriously, I never expected that Delightful Girl Choon-Hyang would be this good. Han Chae Young and Jae Hee are so cute together and I've noticed that most of Jae Hee's partners are super pretty like Han Ga In and Eugene... Anyways, the OST of the drama was also super awesome and I enjoyed listening to all of the songs being played in the series. What I especially liked about this drama is the constant fighting of the main characters which I find rather cute and I guess that's what makes this a unique one. The drama is about a sassy girl named Choon-Hyang who has been forced to marry Lee Mong Ryong (Jae Hee) who likes to get into fights. I think that they're a match made in heaven though.
Posted by belizema at 12:27 AM