Once Upon A Time In Saengchori 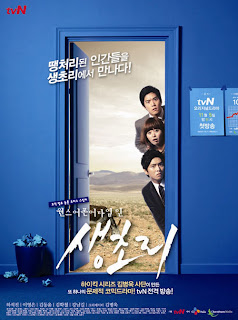 Just finished watching this today... and its got 20 episodes in all. I was a bit disappointed that the main girl didn't end up with the guy that I totally fell in love with but anyways that's how love works right? It's pretty complicated but you never know what you just might feel for a certain person. I think that Kim Dong Yoon (the guy below the girl in the picture) and Lee Young Eun ( the main girl who starred in Full House as Song Hye Kyo's best friend and as Song Joong Ki's girlfriend in another drama) are both pretty cute enough to entertain you and not to get you bored throughout the series. They have an awesome chemistry even though they didn't end up together (sorry for the spoiler) and I think that their friendship is just superb. So, the drama has humor and suspense at the same time which makes it pretty thrilling and exciting because it involves a murder case. The twists in the story are really unpredictable which leaves you wanting for more.
Posted by belizema at 5:55 AM