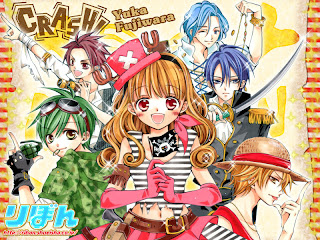 I was having second thoughts posting about Crash! since it's an ongoing manga and so I'm not finished with it yet but I'll just post about it anyway in case I forget. Oh, it's a reverse harem alright but it focuses more on idols and the main girl being serious about her job as the band's manager. I was a bit disappointed since I hoped for a lot of romance but it's a cute manga in general so I read it anyway. My favorite character so far is Yugo, the blue-haired player although I also like Kazuhiko, the green-haired pretty boy a bit.
Posted by belizema at 10:02 PM